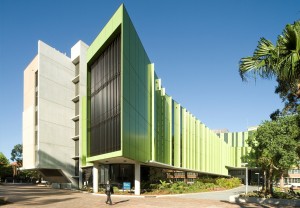 The Lowy Symposium has revealed significant developments for cancer treatments and cure during what has been an eventful month for researchers leading up to the opening of the new state-of-the-art Lowy Cancer Research Centre.

Australian and international scientists came together to share real-time data on the latest studies, and to engage in discussion and debate for improving future research.

Advanced equipment and technologies, and recent breakthroughs in drug therapies were among the highlights from the symposium.

Associate Professor Ricky Johnstone from the Peter MacCallum Cancer Centre in Melbourne said: “Throughout the meeting there was an emphasis on the use of cutting-edge platform technologies such as high throughput chemical screening and molecular imaging.”

Researchers also discussed the emergence of sophisticated new methods for discovering cancer drugs. One of those is structural biology, where scientists analyse the structure of protein molecules at a three-dimensional level.

“Exciting examples where structural biology has contributed recently to the development of drugs that are now in the clinic include Imatinib (Glivec) and Nilotinib to treat myeloid leukaemia and Gefitinib for lung cancer,” said Professor Michael Parker from the St Vincent’s Institute of Medical Research in Melbourne.

Professor Parker is a lead researcher at the ACRF Rational Drug Discovery Facility housed in the St Vincent’s Institute, built with a $900,000 grant from the Australian Cancer Research Foundation.

“…structure-based drug discovery in my lab has revealed molecules that can disrupt these interactions,” he said.

The research is part of a joint project between the St. Vincent’s Institute and the Centre for Cancer Biology (CCB) in Adelaide.

“This project has already revealed six specific sites that may be targeted by new drugs. In fact we are using this information to map exactly where two existing lead drugs bind to in order to improve their effect and guide us into which types of cancer they may be most useful against,” said Professor Lopez from the CCB.

ACRF awarded $3.5million to the CCB in 2009 to establish a new Cancer Genomics Facility, enabling researchers to analyse data more efficiently and rapidly to obtain insights into genetic modifications for the development of better cancer diagnostics and treatments.

At the symposium Professor Lopez said the development of the new facility will accelerate anti-cancer progress for the joint project.

The 2010 Symposium was the first of what is planned to be a biennial conference series at the Lowy Cancer Research Centre.