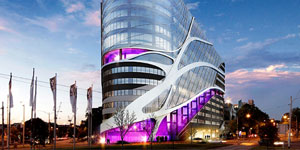 A ‘liquid biopsy’ developed by Melbourne researchers has the potential to determine whether malignant tumours are shrinking, faster and more accurately than ever before. This simple new test would replace invasive tissue biopsies by analysing cancer tumour DNA in the blood.

Clinician researcher Dr Sarah-Jane Dawson from ACRF-funded research institute Peter MacCallum Cancer Centre said looking for this circulating tumour DNA in blood had been like ‘looking for a needle in a haystack’. However new-generation genetic sequencing allows a complete snapshot of the cancer to be captured as it evolves.

“As the cancer cells turn over they release their DNA into the bloodstream. While we’ve known this for some time, it’s only been recently with advances in genomic technologies that we now have sensitive techniques that allow us to very precisely identify this small fraction of tumour DNA in the blood.”

“We think this is a really exciting development and it does hold a lot of promise for making a big difference to the management of cancer patients.” Dr Dawson said.

A clinical trial testing the liquid biopsy in Victorian breast cancer patients is due to begin next year.

Dr Dawson said in an ideal world, regular biopsies would be taken during someone’s treatment. But often that’s not feasible, and it’s invasive.

“By repeating these blood tests regularly, they may give us a very accurate understanding of whether someone is responding to their treatment or not — which is very important for a woman to understand.”

“She doesn’t want to be on a treatment that’s not working, or be exposed unnecessarily to side-effects, when she could be switched to a therapy that could be more effective,” Dr Dawson said.[/vc_column_text][/vc_column][/vc_row]