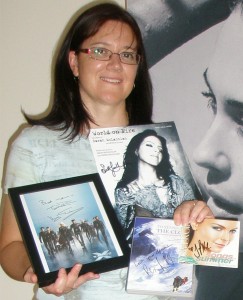 Leanne Imber of NSW recently organised a cancer fundraising online auction. She was  inspired by a mother in America who had auctioned off signed celebrity merchandise to raise money. Leanne decided to bring the concept to Australia and received a very positive response from the people she approached for assistance.

Thanks to support from many Australian and International celebrities, including Actor Hugh Jackman, Surfing Champion Layne Beachley, and Singer Pete Murray, Leanne reached her cancer fundraising target of $1500 which she donated the Australian Cancer Research Foundation (ACRF).

Leanne encourages everyone to get involved and host their own cancer fundraising event “It’s a great way to contribute to helping find a cure for cancer. It’s my way of remembering those who have lost their battle with cancer and providing hope to those who are currently [fighting] this dreadful disease.”

Many thanks to Leanne for her support and all those who purchased items for their contribution to cancer research! We hope you’re enjoying your purchases!
We also thank the following celebrity participants for their generosity: