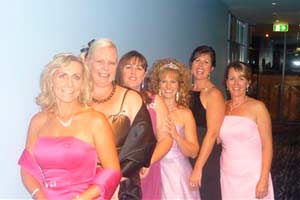 Kempsey is home to big names like Slim Dusty and Thomas Keneally, but it’s the Kempsey Cancerians Annual Ball held every year in May that residents say is the one “signature” event in their town.

Complete with a castle backdrop and Cinderella-esque ushers, more than 300 guests flurried into the fairytale-themed ball this year at the Kempsey Macleay RSL to show their support for cancer sufferers and raise funds for the Australian Cancer Research Foundation.

ACRF’s Natasha Khema was invited to Kempsey for the event and says she was moved by the display of enthusiasm from local residents:

“They show a true commitment in finding a cure for cancer.”

“It brings the community together”.

An annual event in Kempsey since 1988, the spectacular ball is a product of the tireless work and careful planning by the Kempsey Cancerians Committee and their supporters.

It takes months of organising to ensure that the night is a fundraising success. The Committee seeks sponsors, sources prizes for the raffle draw, and talks to the community to highlight the event’s importance and its contribution in the fight against cancer.

This year over 30 local businesses donated items for the auction, and several dozens of prizes were donated by supporters and community members for the balloon raffle. Each guest was treated to fantastic food, music and dancing throughout the night, with ticket proceeds going to ACRF.

The Annual ball signifies Kempsey’s community spirit and their commitment to finding a cure for cancer; and to date, the Kempsey Cancerians and Kempsey community have together have raised over $900,000 for ACRF.

“Everyone in the community is very aware of it [cancer]”,  said the Committee’s President, Christine Shaw.

Almost everyone in Kempsey has been affected in some way by the devastating effects of cancer, including close family members of the Cancerians Committee.

The night was a huge success, spirits were high, and there was no shortage of support for the cause.

Thank you again to Kempsey Cancerians and Kempsey community for your amazing support.

View the Kempsey Cancerians Annual Ball thank you message in the Macleay Argus.