Living with cancer: one man's story 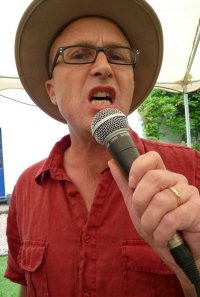 Blue September encourages men to share their stories; stories about their own and their father’s, brother’s, cousin’s, uncle’s, grandfather’s and mate’s experience of cancer.

Jonty Este is a 48-year-old, Sydney-based journalist who is sharing his story.

From the dreaded diagnosis of rectal cancer to facing up to surgery, uncertainty and pain, to encountering hope and hilarity in the most unexpected of places, Jonty’s intimate diary is a raw and real account of one man’s life with cancer.

This Blue September the Australian Cancer Research Foundation (ACRF) invites you to face up to men’s cancer by reading and then sharing Jonty’s story with others.

A pain in the arse: A diary about living with cancer first appeared in the online news publication, Crikey.

Jonty Este’s diary about living with cancer, parts 1 to 5

Part 1: On having a large, malignant tumour

I’ve just come from a final meeting with my surgeon to discuss the details of the operation he’ll perform on me in 11 days’ time. It’s been probably the most gruelling half hour of my adult life as he has had to detail all the risks and warn me of the likely pain to come and the possibility of side effects of surgery to remove a large malignant tumour from my rectum.

Four days until I go into hospital for the operation (on August 24) to take the tumour out of my rectum (we’re terribly formal here – in private we’ve nicknamed it “the Gerbil”). It feels a little like the Phoney War is about to draw to a close and the spring offensive is about to get underway. I’ve got those jangly pre-battle nerves…

Part 3: Surgery and a strange sense of satisfaction

There was a moment, on Tuesday morning as I checked in for my bowel operation, that I instinctively knew that things were going to go well. It was one of those little ice-breaking episodes that lightens the mood from foreboding to a frank realisation that the god who looks after drunks and little children would keep half an eye on me as well.

There is prose and then there is prose – and as far as lyricism, characterisation and dramatic structure goes, the two-page pathologists’ report I received last week would not have had the critics salivating, to say the least.

As avid fans of Ian Fleming’s novels may recall, when James Bond tracks the nefarious Dr No to his island hideout of Crab Key, he and Honeychile Rider are locked in a luxury apartment and treated like honoured guests at a luxury spa. It is, of course, all artifice.

A pain in the arse: A diary about living with cancer first appeared in the online news publication, Crikey.

The ACRF wishes to thank Jonty Este and Croakey editor Melissa Sweet for their support for A diary about living with cancer appearing on the Foundation’s website.