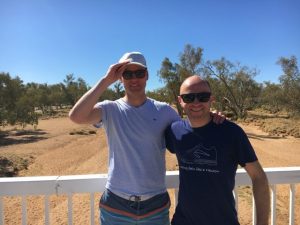 “We’re two good friends who went to university together. We have always enjoyed keeping fit, healthy and running together. In the last two years, both of our fathers were diagnosed with cancer. Due to the medical treatment and care available to them, their doctors were able to halt the disease and today they both have the all clear.

Ferg’s dad, Ian, was diagnosed with prostate cancer at the age of 68. He underwent hormone treatment and had his prostate removed. He is now clear of cancer. It was Ian who introduced Ferg to running when he was eight and has been the main driver behind his passion for running.

Our dads’ experiences with cancer have really taught us about both the value and fragility of life. As a boy and young man you feel like your father is invincible and then you realise he’s not. As fathers ourselves, we could easily follow in their footsteps so it makes us feel a bit vulnerable. The key lesson we’ve learnt is to do what you want to do now – don’t wait for tomorrow as there may not be one.

We are so very grateful to the cancer treatment agencies that we decided to raise funds to continue to improve cancer awareness and treatment.

In mid-August, we covered 88 km of the Larapinta Trail in the MacDonnell Ranges near Alice Springs. Larapinta is a landmark Aussie trail that gave us the chance to connect with and experience Australia as it is and was.

The trail is off-road, hot and dusty. The tough trail running took us completely out of our comfort zone but we were up for the challenge. On the second day of the trail, Dan got a knee injury which meant we had to slow down to a walk. It was a very tough day but the conversation that we had over the nine-hour journey was a true highlight. We were two good mates, just turned forty, trying to solve the problems of the world!

We believe that no one’s loved ones should die from cancer. Cancer affects so many people in Australia and worldwide. It’s a disease that is so destructive and attacks your body slowly. The more we can support research, the better chance we have to minimise the impact it has.

We chose to support ACRF because they are a foundation that is committed to treating all types of cancer and making a difference to people’s lives. Everyone has a story about cancer. We all know a loved one that has been impacted by it, we want others to get on board and help researchers find better forms of treatment.” Dan and Ferg