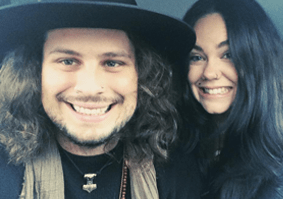 Gemma and her fiancé, Jimi, started the band Gypsys Gift five years ago. Since then, the duo have won an Australian Independent Music Award, achieved rotation on Foxtel’s CMC and will shortly release their highly anticipated, debut album Chapters.

Over the weekend, the band unveiled the new music video for their single, Feed the Fire, alongside a special announcement.

“We do not ask that you buy our new song – we’re doing things a little differently this time. In support of the Australian Cancer Research Foundation, we aim to create awareness of cancer research with the release of Feed the Fire. Our ONLY intention is to raise as much money as possible for cancer research. All funds raised will go directly to ACRF, and this will be an ongoing campaign for us.” said Gemma.

“The last couple of years have been both incredible and heartbreaking for Jimi and I. We have travelled the world and experienced remarkable growth, but we have also been on a tough road.

Two Christmases ago we were faced with the hard news that my Mum, Joanne, was diagnosed with Stage 4 bowel cancer.

Mum underwent multiple major surgeries to remove half her liver, gall bladder, part of the bowel and lymph nodes. She then went through six months of chemotherapy treatment as a further measure to prevent the cancer coming back. 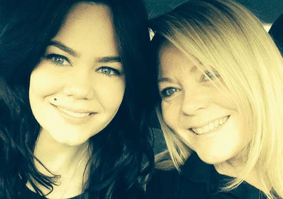 This was a whole new world for my entire family. We felt very much in the dark as we had no experience and no understanding of what anything meant. It’s safe to say the journey was hard on all of us, especially on my Mum, step-dad and two brothers who lived through this every day.

Slowly things began to feel normal again as Mum was recovering day by day. Although the physical and emotional scars of the cancer had not entirely faded, my Mum, being the warrior that she is, was soaring to better days.

Then out of the blue, while I was on my way to a songwriting session, I received a phone call that would once again change the lives of myself and family.

Mum had been re-diagnosed with terminal cancer of the liver. Hearing the news was like being in a movie. A fear that I have never felt, and didn’t quite comprehend, washed over me – I was now faced with losing my mother when she was only 48 years old.

They say, as an adult you must carry on. But this time, it’s not been the case. This is now my life. I often describe it as living in a permanent nightmarish limbo-land.

We all have our good days and our bad days, but my Mum has kept us all positive and moving forward. She has spent her entire life putting everyone else before herself, and even now, she wishes for nothing more than everyone else’s happiness. 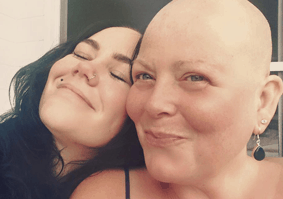 Mum has been fighting cancer for a couple of years now – in true grace. Her resilience, strength and courage is unfathomable and we stand by her side while she battles through this.

This illness has turned the life of myself and my loved ones upside down, and this happens every day to families all over the world. Cancer does not discriminate; almost everyone has been touched by this illness in some way or another.

This painful journey has inspired Jimi and me to help put an end to cancer, and we will not cure cancer without research. This is why we feel so passionately about ACRF. It is my belief that they are by far one of the most compassionate and forward-thinking foundations we know.

We are determined to raise money for the research that we all so desperately need to stop this illness. Every little bit helps and I truly believe it raises the spirits of those struggling with cancer too. Great things happen when people work together.” ACRF supporters, Gemma & Jimi, Gypsys Gift.