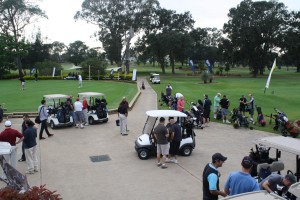 Cr Khal Asfour and Cr Alan Winterbottom, Mayor and Deputy of Bankstown City Council respectively, were keen to be out there on the green. Amazingly many of the men at the event were cancer survivors or are very close to someone who died of cancer or is currently battling cancer. 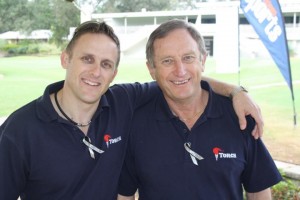 After a lovely breakfast, the teams were organised and ready for the shot gun start at 8am. Players of all various golf handicaps came together and produced a wonderful spectacle. It was all on show. Eagles, aces, chip shots, backspins, backswings, air shots, albatrosses, barkies, birdies, and bogies! We are very happy to report that the sandy bunker was avoided on most occasions and the course etiquette was maintained throughout the day.

The powered golf buggy was a popular choice especially during the back nine! A few Torch publishing staff also doubled up as caddies!

The golf was completed by 1pm. This was followed by lunch, some terrific guest speakers and a very successful auction of a variety of wonderful items including a very large 10 kilogram block of chocolate! Also in attendance during the auction was Ms Tania Mihailuk MP, State Member for Bankstown.

The Golf Day was a huge success, raising almost $18,000 and inspiring many more to further support cancer research.

A big thank you to:

We hope to see you all on the fairway again next year!