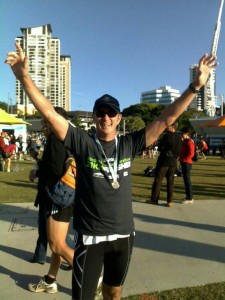 On a very cold morning on Sunday 4th July more than 25000 runners arrived at the Broadwater foreshore to compete in the 2010 Gold Coast Marathon, among them a very special group of enthusiastic & dedicated participants running in support of cancer research. The Foundation had 9 fantastic fundraisers compete in both the marathon and the half marathon in this year’s event, between them raising an outstanding $12,797.19!

Gavin Lister chose to challenge himself in the 21km half marathon, which he himself admitted would be a “very taxing and exhausting” exercise. He decided to raise funds for cancer research in memory of his father Brian and mother in law Siri who both passed away from cancer “well before their time”, and set himself the personal challenge of completing the race in less than 2 hours. During the preparations for the race Gavin was touched hear the personal experiences and stories of how those supporting him had also been affected by cancer, further adding to his motivation. Thanks Gavin for your fantastic fundraising and congratulations on achieving your goal time inside 2 hrs!Another cancer research supporter in the half marathon was David Lester who chose to run in honour of friend Peter McMillan. Peter is currently battling a brain tumour, and selected ACRF as he and David’s chosen charity for the event because “all of the money goes to research”. Thanks David for your generous support and congratulations on the great run, we know you did Peter proud. 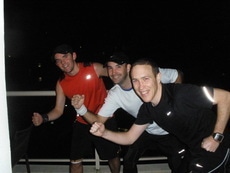 A group of energised friends, ‘Team Stinson in Oz’, also came together to compete in the half marathon and marathon to raise funds and awareness for cancer research. Each team member had their own stories and experiences that brought them to support the ACRF. Greg Stinson set up the team to support Team Stinson in the UK, a fundraising page set up by his brother Neil, after he lost his wife Sam last year, while Steve was running in memory of his mother, who sadly passed away from cancer in 2004. This stellar group were overwhelmed and humbled by the generosity of their family, friends, and colleagues even after just 2 days – which led them to double their target. Huge thanks to Team Stinson in Oz – Greg, Adam, Steven, Leyen, Ian, Liz & Marc for your amazing support!

Congratulations to all our competitors on a fantastic achievement in the marathon, and thank you to you and your families and friends for the generous support!