“Elvis” rocks it at Club Central Menai for cancer research 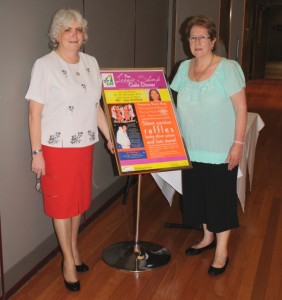 In early 2010, a group of six Club Central Menai employees got together to organise a dinner for the sole purpose of raising funds for cancer research.

Staff at Club Central had been touched by the passing of one of their favourite colleagues and a long standing employee of the Club, Leonie Sharp. Leonie was diagnosed with breast cancer and lost her battle approximately three years ago.

“Leonie was well respected among her colleagues as well as by the patrons of the Club and this is why we decided to name the function in honour of her…It wasn’t hard to give the event a theme because Leonie was remembered to be a person with a great sense of humour and vivacious personality. So the Leonie Sharp Gala Dinner was born!” said Judith Howard.

The Gala Dinner was held at Club Central Menai on Saturday, 13 November 2010. 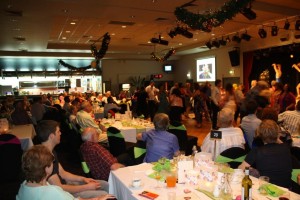 It was a spectacular night, which included a silent auction, lucky door prizes, and the very popular raffles. The headline act of the night was Steve King, also known as “Australia’s best Elvis Tribute Artist”. The strong crowd of approximately 300 were left rocking to the sounds of Blue Suede Shoes and mesmerised by Elvis classics including Love Me Tender and My Way.

“Elvis”, supported by his stunning Las Vegas Show Girls, acknowledged during his performance that “We have all been touched by cancer and I am deeply honoured to have contributed to the evening and hopefully we can all play a part in eradicating this horrible disease”.

The Leonie Sharp Gala Dinner was a great success and raised approximately $4,000 for cancer research.

Big thank you to the Club Central Menai organising committee, including Judith Howard, Paul Russell and Christine Lindner, for putting on this  special night; Mike Walker, Club Central Menai Chief Executive Officer and the Club’s Board of Directors for their fantastic support of this event and cancer research; and MC for the evening, Sue Smithers.

To find out more about how you can organise your own fundraising event in 2011, contact Gilbert Lorquet on 02 9223 7833 or glorquet@acrf.com.au