One step closer to early detection of lung cancer 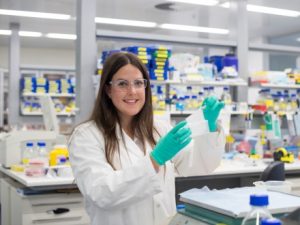 Cancer researchers at ACRF grant recipient, Walter and Eliza Hall Institute (WEHI) in Melbourne, have made a breakthrough that could help early lung cancer detection.

They’ve discovered cells which are thought to give rise to lung squamous cell carcinoma, the second most common subtype of lung cancer. This type of cancer primarily affects smokers and ex-smokers.

The study, led by Dr Marie-Liesse Asselin-Labat and PhD student Ms Clare Weeden, aims to understand how cancer could form. Researchers used donated lung tissue to discover that, when they exposed isolated cells found in the airway of the lung to harmful chemicals, such as cigarette smoke, the cells would rapidly try to repair any damage and make errors in the process.

Dr Asselin-Labat said the team found that despite attempts to help the body repair from damage, the basal stem cell DNA repair process was faulty.

“Our team unearthed some of the first evidence that the basal stem cell DNA repair process is flawed. Pointing to the accumulation of DNA errors and genetic mutations that could eventually lead to cancer,” Dr Asselin-Labat said.

Further genetic analysis using a technique developed in the Institute’s bioinformatics department, confirmed a correlation between the genetic signatures of the lung-based basal stem cells and lung squamous cell carcinoma. This genetic data reinforces that lung basal stem cells could be the ‘seed’ from which a cancer is able to ‘grow’.

Lung cancer is the number one cause of cancer death in the world and there is a link to squamous cell carcinoma for thirty percent of these cases, says Ms Weeden.

“Lung squamous cell carcinoma is a devastating disease with a poor prognosis. This is because these types of tumours are often discovered too late, at a point where the cancer is inoperable. Therefore, having the ability to detect this cancer early could be a real game-changer,” Ms Weeden said.

“The hope going forward, is that our work will be a gateway to new, tailored prevention and treatment measures for patients with lung diseases,” Ms Weeden concluded.

This article was first published by WEHI and the image of Dr Marie-Liesse Asselin-Labat and PhD student Ms Clare Weeden was provided courtesy of WEHI.