Recent work at St Vincent’s Institute (SVI) using the Australian Synchrotron may help in the development of next-generation drugs to treat major diseases such as leukaemia.

Professor Michael Parker’s team at SVI has used the Australian Synchrotron to visualize a protein called the GM-CSF receptor. Abnormal signalling through this family of receptors is thought to be involved in certain types of leukaemia.

“More detailed knowledge of the shape of the receptor and its function may help us to design new and potentially more effective drugs to target leukaemia,” said Professor Parker. 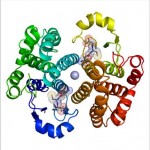 “This breakthrough development of new leukaemia treatments is the kind of major advance that the Australian Cancer Research Foundation is committed to funding,” said ACRF Chief Executive, Mr David Brettell.

“Dramatic technological advances continue to increase our ability to get to the heart of how cancer behaves, so we are now seeing specially designed drugs which are being developed to alter that behaviour and control the growth of leukaemia” added Brettell.

In 2008, a team of scientists from SVI, assisted by the ACRF grant, unravelled the structure of a cell signalling receptor in the blood control system which when damaged is responsible for diseases such as leukaemia. Their discovery helped to explain, for the first time, how this receptor is activated and formed the springboard for the development of new treatments.

The Australian Cancer Research Foundation is now in its 25th year of operation.

Individual ACRF grants exceed $1.5 million with no upper limit. This is unique funding for infrastructure, not available from any other private source in Australia. A grant from ACRF in 1999 kick-started 2006 Australian of the Year Professor Ian Frazer’s quest to develop a vaccine to prevent and treat cervical cancer.

Download a copy of the SVI Synchroton Press Release