Colour & Shave for a good cause 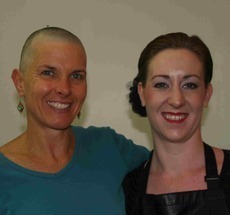 A bright idea, generous donations, and a confident ACRF supporter made for a wonderfully successful recent fundraiser.

Tania Kriticos chose to fundraise for cancer research through her unique head shave because of her personal connection with cancer. “Having a number of family & friends who have succumbed and are currently battling with various forms of cancer, I wanted to pick an organisation that wasn’t cancer-specific”.

As an extra motivating factor to get her friends and family to donate, Tania included a hair colour auction as part of the process. When a donation was made a vote could be placed for which weird and wonderful hairstyle Tania would sport in the 2 weeks prior to her head shave – choices included bright blue, hot pink, zebra stripes and rainbow. In the end, blue won the day and along with the help of Miranda from Kurtz Hair by Design in Hawker, Tania was transformed! Much to Tania’s surprise, she received many amazing positive comments from strangers about her unique hairstyle!

On the 1st of March 2012, Tania’s now faded blue locks were all shaved off, again with Miranda’s help bringing an end to her fundraiser which she describes as “terrific fun and all for a great cause”.

A huge thank you to Tania and all her wonderful supporters for contributing so generously to cancer research – over $2,500 was raised!