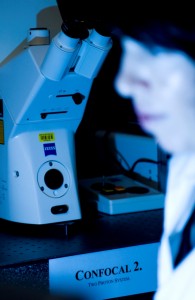 Australian researchers at the Institute for Molecular Bioscience, University of Queensland (UQ) have found a novel way in which the proteins that ‘glue’ cells together to form healthy tissues can come unstuck, opening new avenues to understanding how these proteins are disturbed in diseases such as cancer.

Professor Alpha Yap and Sabine Mangold have been studying how cells stick together and the diseases that occur when cells detach when they shouldn’t. In particular, the progression of tumours to advanced stages commonly occurs when cancer cells separate from their tissue of origin.

“We examined a protein called HGF that is often found in cancer,” Ms Mangold said.

“HGF regulates cell growth, shape and movement and aids cancer cells in migrating to other tissues and spreading through the body.

“Scientists have long known that HGF disrupts the junctions where cells join together, but the exact mechanism of how this occurs hasn’t been understood until now.”

The team made their discovery by examining the molecular machinery that binds cells. One key component is a protein called E-cadherin, which forms the adhesive to hold cells together.

E-cadherin associates with a scaffold found inside the cells, made of a protein called actin. Normally, actin links into a meshwork with cadherin to make strong contacts between cells

Ms Mangold and Professor Yap found that the actin scaffolding seemed to be lost just as the cell contacts became disrupted. They discovered this occurred because HGF caused another protein, Myosin VI – which normally acts to link cadherin and actin together – to be lost from cadherin.

“So HGF was causing this interlinked meshwork of proteins to come apart, breaking up the system and causing cells to drift apart,” Professor Yap said.

“The discovery of this pathway may open new avenues to understand exactly how proteins that bind cells together are affected in disease, which could lead to new targets for treatments of such disease, including cancer.”

“This work would not have been possible without the ACRF Cancer Biology Imaging Centre (and its predecessor, the ACRF Dynamic Cancer Imaging Facility)”, Professor Yap said.

“Many of the experiments that were necessary for our study required the cutting-edge instruments of the Cancer Biology Imaging Facility. There were key questions that could only have been answered with the specialised resource of the Centre”

“The Centre has allowed us to really develop our science to a new level, where we can directly engage important questions whose answers address fundamental issues in the cell biology of cancer”, Professor Yap said.

Read more about the Institute of Molecular Bioscience grant from ACRF.