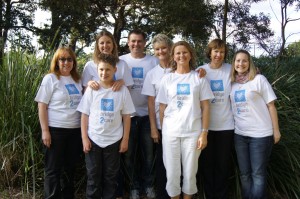 October 14th marked the start of the 2012 Carer’s Week, a week to raise awareness of carers and their importance in society.

In honour of this week, Bo Lukich-Yang had the idea to celebrate carers with a morning of adventure climbing the Sydney Harbour Bridge, and bridge2care was born. Immediately there were many people keen to take part in the challenge and support the chosen charity for the inagural event, the Australian Cancer Research Foundation (ACRF). The team chose to support cancer research because “people everywhere have been touched by this indiscriminate disease” with some participants climbing particularly in honour of loved ones that had been lost to cancer.

As a beautiful day dawned in Sydney, over 40 people took to the bridge as part of the event. The group was made up of all ages and included cancer survivors, care supporters, nurses, PhD students, and children and adults with disabilities. An amazing day was had by all involved and more than $9,000 has already been raised for cancer research.

Organiser Bo was thankful to all those who got behind the event, “it wouldn’t have been possible without the amazing support of family and friends! Who went way beyond because they believed”.

The ACRF would like to thank Bo and all the participants for your generous support of cancer research and for celebrating carers along with us in the first bridge2care. Also a special thank you to Carers NSW & Berowra District & Community Bank (a branch of Bendigo Bank) for their Carers Week Grant which sponsored the climb for some of the event participants.