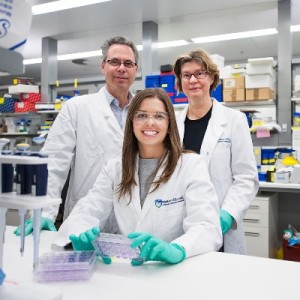 Cancer researchers at Walter and Eliza Hall Institute have discovered that an existing medication could prevent breast cancer in women carrying a faulty BRCA1 gene.

People who carry a faulty BRCA1 gene are at high risk of developing aggressive breast cancer. Currently, many women with the gene mutation choose surgical removal of their breast tissue and ovaries to reduce their chance of developing cancer.

“These cells proliferated rapidly and were susceptible to damage to their DNA – both factors that help them transition towards cancer. We were excited to discover that these pre-cancerous cells could be identified by a marker protein called RANK.”

Professor Lindeman, who is also a medical oncologist at The Royal Melbourne Hospital, said the discovery of RANK as a marker of cancer precursors was an important breakthrough because inhibitors of the RANK signalling pathway were already in clinical use.

“An inhibitor called denosumab is already used in the clinic to treat osteoporosis and breast cancer that has spread to the bone,” he said. “Which is what led us to investigate what effect RANK inhibition had on the cancer precursor cells in BRCA1-mutant breast tissue.”

The research team showed that RANK inhibition switched off cell growth in breast tissue from women with a faulty BRCA1 gene and curtailed breast cancer development in laboratory models.

“We think this strategy could delay or prevent breast cancer in women with an inherited BRCA1 gene mutation,” Professor Lindeman said. A clinical trial has already begun to investigate this further.

A concurrent study led by an Austrian group had also identified the importance of RANK. Both studies suggest that targeting RANK offers hope to women at high genetic risk for breast cancer.

Professor Visvader said the discovery had its basis in more than a decade of investigations of breast stem cell function.

“By thoroughly dissecting how normal breast tissue develops, we have been able to pinpoint the precise cells that are the culprits in cancer formation,” she said.

“It is very exciting to think that we may be on the path to the ‘holy grail’ of cancer research, devising a way to prevent this type of breast cancer in women at high genetic risk.”