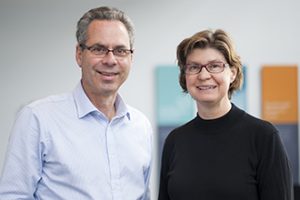 Professor Lindeman and Professor Visvader have been selected for their contribution to cancer research and a series of landmark findings that have provided a new framework for understanding how breast cancers arise and how they could be prevented and treated.

Over the past decade, the researchers and their teams have identified the cells responsible for giving rise to normal breast tissue, making key discoveries in the regulation of normal breast growth and how errors within this process can lead to breast cancer.

Most recently, they identified the culprit cells that give rise to breast cancer in women who carry a faulty BRCA1 gene, and found that an existing medication for osteoporosis could provide a non-surgical option for breast cancer prevention in these women.

Mr Gary Jeffs, State Manager at Perpetual and Trustee of the Clive and Vera Ramaciotti Foundations, made the official award announcement during a ceremony at the Walter and Eliza Hall Institute.

Professor Visvader said she was honoured to receive the prestigious award.

“This medal is a testament to more than 15 years of continuous work – not just by Geoff and myself, but also our very talented teams of students, postdoctoral students, research assistants and our collaborators, who have been instrumental to the discoveries,” Professor Visvader said.

Professor Lindeman said the support of the Ramaciotti Foundations would advance efforts to translate discoveries from the laboratory into a clinical setting.

“With past Ramaciotti winners having been responsible for important contributions to the health of our communities, we feel deeply humbled and a sense of responsibility. Jane and I will continue to work with our amazing teams to progress fundamental discoveries from the bench to the bedside,” Professor Lindeman said.

Past Ramaciotti Medal winners from the include Institute director Professor Doug Hilton.

Over the years, Australian Cancer Research Foundation has supported WEHI by providing three grants totalling AUD $5.5million. These grants have been put towards cutting edge cancer research equipment and technology.

The original news article was published on the WEHI website. Image of Professor Lindeman and Professor Visvader courtesy of the WEHI.