Ashleigh’s Dinner for a Difference 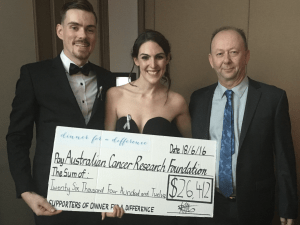 “My name is Ashleigh Mills, I’m a 26-year-old living in Sydney. In June 2015, a few months after finally saying goodbye to six years of tertiary education, I started my first permanent full-time role at a legal firm – Holding Redlich. At that time, everything seemed to be going according to plan.

Then, one night on a weekend away with friends I felt a weird sensation in my throat. A friend who had heard this complaint noticed that there was a visible lump on the side of my neck. I had absolutely no idea where it came from, or what it was, but I was pretty quick to assure her that it was nothing – obviously.

I’d been to the doctor about the sensation in my throat a few times, but each time I was told that it was likely a response to stress – something that I didn’t question.

When my friends noticed a lump I assumed that it would be nothing and told them so. Thankfully, they didn’t take no for an answer and made sure I went to the medical centre the following day. One week later the biopsy results were in.

That lump turned out to be cancerous and I was diagnosed with thyroid cancer. For someone who had always planned their day down to the nth degree, the diagnosis came as a stark reminder that no-one can ever really know what life has in store around the corner.

I still can’t really comprehend everything that happened in the months following my diagnosis. But I remember that for me, one of the hardest things was learning how to deal with telling the people you care about most. In mentioning the word cancer, a subconscious fear sweeps across people’s eyes for just a moment and, as the affected person, you can’t escape how it makes you feel.

That’s the thing with cancer, it doesn’t follow a script and it certainly doesn’t come with a manual. You can’t always control it, but you can control the way you respond to it. It is easy to fear cancer but I don’t think we can afford to. We need to replace that fear with action because every moment is truly important.

By August 2015, my thyroid had been removed and I had commenced radioactive iodine therapy.

While thyroid cancer itself is often highly treatable, many cancers are not and each year too many people lose control of their lives to a disease that poses more questions than answers.

Cancer remains the second biggest killer in Australia. It is an awful and indiscriminate disease, but it is not invincible. Nor should we accept it to be. 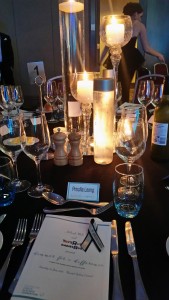 With that in mind, I decided that I needed to do something in the fight to end cancer and that I needed to do it fast. I approached the Australian Cancer Research Foundation with a small idea and it grew into something much, much bigger. Then last Saturday night, after months of planning, I hosted a charity black tie gala event called Dinner for a Difference. We raised over $26,000.

Honoured premium sponsors and partners on the evening, Toy ‘R’ Us and Babies ‘R’ Us, said:  ‘The support from the attendees was overwhelming, most of the guests knew Ashleigh personally and most had a very strong connection with her. It was such an exciting night filled with great positivity and joy. The effort that was put in by Ashleigh and all those involved was outstanding and it was so great that all the hard work paid off’.

I chose to support the ACRF because I immediately felt buoyed by the focus of the organisation to end cancer – for good. While I appreciate the importance of programs that are targeted towards raising awareness of the disease and providing post-diagnosis assistance, I truly believe that the key is research.

To me, cancer research is more than important, it’s absolutely crucial. By funding cancer research, we are getting closer to a breakthrough that will change the way we think about cancer and the many lives that it continues to affect. Thanks to ACRF and its supporters, cancer researchers are being armed with the tools that they need to make breakthroughs.

Thank you to everyone who joined forces with me to support the ACRF, including all 180 guests who attended and Holding Redlich who generously signed on as a gold sponsor of the event. Thank you for believing that together we could make a difference. I am so blown away by everybody’s generosity – blown away and inspired to do more.” – ACRF supporter, Ashleigh Mills.