One dollar and one mighty mountain… 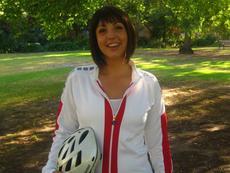 WATCH this space as one unstoppable young lady shows how $1 really has the power to change the world!

Amanda Ghirardello, 27, is setting out to trek through the mighty Himalayas in March 2011 and hopes to encourage one million individuals to support her fundraising efforts by donating just $1 each to The Australian Cancer Research Foundation.

Despite having no previous mountaineering experience, Amanda will climb first to Mount Everest Base Camp at an elevation of 5400 metres above sea level and then go on to ascend Island Peak which stands at 6190 metres.

Amanda is no stranger to what may seem an impossible challenge; at the age of 25 she was diagnosed with stage 3 breast cancer, and after a radical mastectomy and 16 months of chemotherapy, she is now in remission.

“REMISSION” – I’d used the word myself during the many sleepless nights, while trying to reassure the gaunt, scarred, bald-headed girl staring back at me from the bathroom mirror. But never had such a statement been scrawled by my doctors hand… until now’, writes Amanda on her fundraising page.

And as we have experienced first hand, nothing will stop Amanda and her ever-growing number of supporters to find a cure for cancer.

‘I’m playing with everything I’ve got! My mission: to climb Mt Everest and raise a million dollars for cancer research. Why? Because I’m certain that diseases like cancer have no place in a world where anything is possible. Because I’m committed to showing fellow cancer patients that REMISSION truly is possible. And because I’m committed to one day telling my great-grandchildren about the disease that WAS cancer and how it came to be cured.’

Amanda is someone who truly captures our heart and imagination, and as you hear her story and follow her fundraising page, it’s not difficult to see why even complete strangers are donating to the cause.

Her enthusiasm, courage and dedication is felt with her final statement on her inspirational donation page blog,

‘…when human beings work together amazing things happen. Your mission, should you choose to accept it, is to trade $1 for a chance to help change the course of our history. $1 has the power to truly change the world! One million people raising one million dollars to see the goal of cancer cure be realised… GAME ON!!’

Amanda reminds us that nothing is impossible, and at ACRF, we are also up for the challenge! We will continue to follow Amanda’s fundraising efforts, providing updates on the events leading up to the mighty climb, and the donations received. Well done Amanda, ‘To Everest & Beyond’!