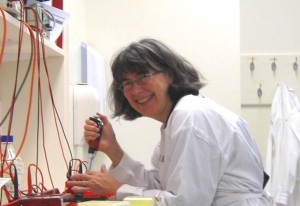 A world-leading researcher and ACRF research grant recipient, Professor Emma Whitelaw, has been awarded top honours in the fields of biochemistry and molecular biology during an international scientific meeting.

In 2007, ACRF awarded $2.7 million to Professor Whitelaw and her research team at the Queensland Institute for Medical Research (QIMR) to establish the ACRF Centre for Cancer Epigenetics. Epigenetics is the study of mechanisms which modify DNA structure in subtle ways, and thus change gene expression, without influencing the DNA base sequence.

The Jubilee Medal awarded by The International Union of Biochemistry and Molecular Biology (IUBMB) represents recognition for her world-leading research on the inheritance of epigenetic marks at the ACRF-funded institute.

“It is a great pleasure to stand up, as an Australian, to receive an award like this at an international meeting. It reaffirms to all present Australia’s level of excellence in scientific pursuits,” said Professor Whitelaw, who is thrilled with the top honour and also her association with ACRF.

ACRF’s grant was awarded to Professor Whitelaw and her team to ensure continued world-class research in epigenetics, and has helped enormously in expanding their research to cover the role of epigenetics in human diseases, notably cancer.

Read more about the role of epigenetics in cancer and the ACRF Centre for Cancer Epigenetics at QIMR.