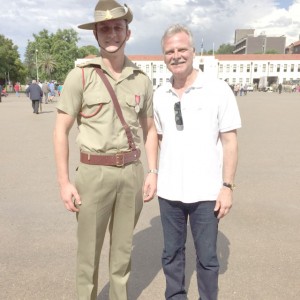 “I support the ACRF because my son is alive and well today thanks to the great strides being made in cancer research around diagnosis and treatment.

My 23 year old son was diagnosed with testicular cancer during his final year of training to become an Officer in the Australian Army. Within days of hearing the news he had to go in for surgery and had an orchiectomy. Unfortunately though, at that point, the cancer had already spread to his lymph nodes and he was told that he would have to undergo chemotherapy treatments.

He began his chemo immediately following his graduation from the Royal Military College in December 2013. But as bad luck would have it, he didn’t get an all clear, even after four rounds of chemo. So the next step was an extensive open abdominal surgical procedure, known as a retroperitoneal lymph node dissection (RPLND) which was followed by a lengthy recovery. Fortunately, he’s now in remission and has embarked on what will be a proud military career.

Becoming a Partner in the Cure was a small way for me to help others become cancer survivors like my son.”