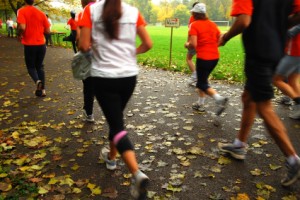 The 37th annual City to Surf in Perth was a record-breaker – over 45,000 participants got involved through the days 6 events. For the Australian Cancer Research Foundation (ACRF) it was also a record breaking event with our highest ever fundraising total coming in from the 2012 event – over $18,000!

The ACRF had a mammoth group of supporters in the event including a number of teams. As with any group of supporters there are so many stories about why cancer research is the chosen cause to support as part of the race, and for many it was the direct and indirect impact of cancer in the lives of those close to them, and in the hope that “we can find a cure for the future, so that maybe one day, [our] friends and family won’t have to suffer the pain and suffering caused by cancer in any way”.

Many of our teams formed in honour of someone they had lost to cancer – Team J-Rad were running in honour of former Labor State MP Jaye Radisich who passed away earlier in the year from a long battle with cancer and Team MG got together their mother’s group to run in memory of their friend Vickey who lost her battle with cancer last year. For other teams and individuals there were many stories of loss due to cancer, and their belief in “supporting the research to find a cure”.

On the day perfect conditions meant a fantastic day for all competitors and our supporters shone through beating target times, making personal bests, or just making it to the finish! The competitors were encouraged in their run by the great atmosphere and their personal motivations in taking on the race.

We would like to thank each and every one of our runners for your generous support of our work! The over $18,000 raised will be going to world class cancer research throughout Australia that is helping to speed up the discovery process in our fight against cancer, and we’re so glad you were part of our record-breaking City to Surf year! Congratulations and thanks going out to Allan & Graham, Charles, Dar, Emma, Gaelle & Matthew & Sebastian, Jackie, Ken, Mary, Melissa, Monique, Natalie, Rebecca, Sarah, Sean, Sibbel Family, T & Moose, Team Agility Project Logistics, Team Cliffs, Team J-Rad, Team MG, Team PKF Mack & Co, Team UED and Team Zig Zags OSHC!

Join in a sporting event in your area for cancer research.