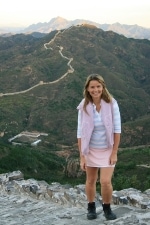 Anne-Louise (Lou) McWilliam was the trek’s highest individual fundraiser. A young mother of two, Lou lives in Hong Kong and lost her sister to cancer in 2003. A British Australian, Lou has raised AUD $31,720.41. Since completing the trek she has continued fundraising tirelessly for cancer research, talking to businesses and community groups in Hong Kong and writing about ACRF’s work and cancer research on her own website.

Lou has had fantastic support from the Hong Kong community. We thank the individuals, family and friends who supported her and the companies who contributed to her challenge – Links Relocations and Commonwealth Bank of Australia; The Australian Association of Hong Kong and British Chamber of Commerce in Hong Kong, RTHK Radio 3 and The Royal Hong Kong Yacht Club. An extra special thanks to Australian International School whose Christmas Fair was Lou’s top-earning fundraiser.