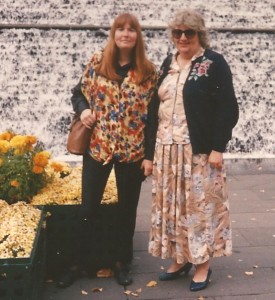 “In the UK in 1998, my twin sister, Rosemary discovered a lump on her breast and was diagnosed with breast cancer at only 38 years old.

Rosemary and her husband were busy parents with four kids – two teenagers Rachel and Tommy, an 11 year old daughter, Jenny and a 9 year old son, Sam. Her illness was extremely hard on the whole family. We felt powerless as we watched her endure so much pain and distress at the thought of leaving her children.

Rosemary fought courageously and was an inspiration to her community. Her friends and neighbours rallied to support the family during their time of need. The locals made renovations to their house to make her life easier and raised money to send her on a trip to visit me in Australia. This was one of the happiest months of my life, we shared precious time reconnecting and reminiscing about our childhood.

It was heart-warming to know that so many people were offering a helping hand where they could. Wednesdays became known as ‘Rosemary Day’ in the area and each week, for three whole years, a group of ladies would take her out for the day. They would visit beautiful and interesting places and then have dinner together at their favourite restaurant.

After five years of suffering Rosemary sadly lost her battle on her daughter’s 11th birthday. It is now a bittersweet day for the family and each year on the anniversary the four children meet in the church garden to celebrate their mother. The two girls also “Run for Rosemary” in Mother’s Day fundraising marathons.

As her twin sister I feel her loss greatly, it’s very upsetting for me knowing that she did not get to see her children grow up or meet her grandchildren. I know that Rosemary would be so proud of her family and how much they have cared for each other.

Over the years, cancer has continued to touch the lives of friends and others around me. A couple of years ago my husband and I realised the importance of cancer research first hand when he was diagnosed with melanoma and took part in a research trial. He has since developed kidney cancer and is being treated with targeted immune therapy which would not have been possible a few years ago.

I often think back to the time when Rosemary developed cancer and appreciate all the progress that has been made since then. I support the ACRF with a monthly donation and have left a bequest in my will. I know my donations go towards helping the ACRF fund the necessary equipment that allows researchers to make many more life-saving discoveries. I hope that together we can spare many families the heartbreak of losing their loved ones in the future.”

Learn more about becoming a regular giver.
Share your story